Are We Right to Encourage Hatred, Violence, Rape Against Sex Offenders?

Close your eyes and remember the worst thing that ever happened to you. Maybe you lost a loved one in a tragedy. Maybe you suffered a horrible accident that left you paralyzed or disabled. Or maybe you are one of the more fortunate ones, and the loss of an expensive diamond ring or the break-up with a boyfriend or girlfriend is the worst you have experienced.

Or maybe you are like Diena Thompson and suffered the almost unimaginable—the violent death of a precious child at the hands of a rapist and murderer. What kind of revenge would you have wished on her killer? What type of payback would ease your pain a little?

Jarred Harrell is right where he belongs, in prison for life for the brutal murder of little Somer in late 2009. Would that be enough for you, or would you want more payback, more revenge? 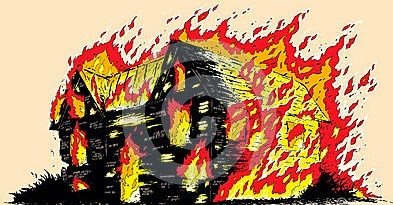 The house where Jarred had lived and Somer was murdered had fallen into disrepair and long been condemned. Earlier this month, it was burned to the ground as part of a fire-training exercise by the Orange Park, Florida, fire department—and Diena Thompson. She participated with glee, her smile described as “cathartic” by a journalist, and, according to his interview, she felt delight in the act, proclaiming herself “the big, bad wolf this time.”

I am sure there is not a one of us who does not understand her feelings.

The media is making much of this, and beyond the local level. Is this wrong? If so, why?

One answer is found in the comments posted to the comment board of one article. They range from, “He [Harrell] should have been in it,” to, “Maybe he will be getting raped for life where he is. Wouldn't that make you feel better? And when he is 80 and some young 25 y/o comes in and rapes him and the guards ignore his screams, that will be part of justice.”

No, that will be part of something that has no place in justice. That is part of vigilantism. That is as much a part of evil as that which Jarred Harrell committed. What irony it is that, in a protest against sexual violence, one wishes for more sexual violence to be committed.

The journalist who wrote that article and played up the joy that Diena experienced in her metaphoric act of vengeance knew that comments would be of that nature, as did the media outlet that published it, as did other journalists and outlets that wrote and published like stories, and they are many.

The harm is more than just giving vigilantes a platform from which to spew their hatred, ignorance, and violence. There are, according to fairly difficult-to-gather figures, somewhere over 700,000 men, women, and children registered as sex offenders in our nation. A scant handful have come near the atrocities that Harrell visited upon Somer, but the vigilante mentality is unable to process that.  To those determined to hate, stories such as this are all of the justification they require to continue the hatred, to refuse to believe the facts, to demand with every opportunity the harshest possible consequences to everyone on the registry because, you see, they all molested children; they are all rapists and destroyers of innocent young lives, and if they haven’t murdered yet, well, just give them time because they will all do it again and will probably kill their next victims.

They are undeterred by the facts that give lie to these spurious statements.

So the questions remain: Are we right to encourage hate and violence against sex offenders? Does it really help those in pain heal? And the biggest question of all, in a paraphrase of an old cliche: Does an eye-for-an-eye make the world a safer, better place to live—or just a blind one? Or, in this case, a raped one?
Posted by shelly at 4:21 PM 6 comments:

A Result of Sex Offender “Stranger Danger” Nobody Saw Coming

The entire sex offender registry—indeed, the entire sex offender industry—is built around the concept of “stranger danger,” the idea that children are at high risk of sexual assault from people they do not know, strangers, people who have already sexually offended and are out there just waiting to grab a random kid and do it again. Nothing will produce spasms of eye-rolling and unintelligible

sounds of disgust and derision in the well informed as will the term “stranger danger.”

The greatest part of the American citizenry supports the public sex offender registry. And yet when anyone says that those most likely to sexually abuse a child are those the child knows, those who aren’t on the registry but rather are close to the child in his everyday life, often family members, everyone within hearing distance nods his or her head in agreement. They do know this. It has been written in article after article, talked about ad nauseam by television talk show hosts and pop psychologists, and verified by any personal knowledge they have on the subject. Yet still they support the public sex offender registry.

Three members of a family and their accomplice are in jail because of stranger danger. They apparently had not read the articles or seen the talk shows, and when the mother of a six-year-old child in Missouri felt her son was too friendly and nice to strangers, to people he didn’t know, thus increasing his risk of becoming a victim, the boy’s grandmother and aunt agreed. So they did what any loving family would do; they decided to teach him a lesson.

They enlisted the help of a co-worker of the boy’s aunt who was ready and willing to play the part of Mr. Stranger Danger himself, and his performance was truly Oscar-worthy. He lured the little boy into his pickup as he got off the school bus. There the stranger from Hell proceeded to tie his hands and feet together; he told the terrified child he would not see his mother again; he threatened him with being “nailed to a wall.” He threatened him by waving a gun at him and covered his face with his jacket so that he could not see.

In this condition—bound, vision obscured, terrified and sobbing—he was carried into the basement of his own home. There he had his pants removed and was told he would become a sex slave. This surely begs the question of what a six-year-old child knows about being a sex slave. After four hours in captivity and terror, he was released and told to go upstairs to his mother. There he was lectured by his family about—you got it—stranger danger. This kid would have been safer with almost any stranger I could drag in off the street than he was with his family members.

At school the next day, he disclosed his ordeal to school authorities. The four adults were arrested, and the little six year old victim of the unfathomable ignorance and cruelty of the people who should have protected him from ignorance and cruelty was placed in protective custody and is by now most likely with a foster family.

What will happen to this family and to this child is anybody’s guess; all we can do is keep the child in our thoughts and prayers.

And, lest the irony has escaped anyone, this case proves that, in spite of the myths that persist about bogeymen hiding in the bushes, strangers that will pounce without notice, once again the true bogeymen, the ones so much more likely to bring fear and pain and horror to children, are those close to them in their everyday lives.
Posted by shelly at 7:22 PM 8 comments:

Hi there, I'm a sex offender

You may not know that, but you may know me. My son Billy is in third grade at Cooper Elementary. I drop him off and pick him up most days, and I have attended several of the parent days and parent lunches there with you. The superintendent has given me permission, and that was all that was needed. Now that has changed. Before I can come to school for any reason again, I have to run an ad like this one, at my expense, for two weeks. There will be a hearing at the end of the two weeks, and any of you who want to keep me from going on school property are invited to come and speak against me. As I understand the legislative bill, only negative testimony will be heard. Apparantly they don't want anyone saying anything good about me. Anyway, here's the notice, and it will run every day for two weeks, and then the meeting will be held in the board room at the administration building at 7 p.m. on February 28. See ya'll there!


If you aren't laughing by now, if you realize that this is real, then I hope that you are crying. The bill calling for everything outlined above, Virginia House Bill 1366, has passed the House Courts of Justice Committee unanimously. The full House of Delegates votes on the bill Tuesday, February 3--TODAY.

We are in the midst of a whirlwind at this point in time. More and more studies are being released, showing what we have been saying for years, and more and more journalists are writing the facts and the truth, and everything they write points to the utter ridiculousness of legislation such as this. And then the crosswinds of more restrictions and harsher laws and legislation based on nothing resembling facts and truth threaten to blow us away, especially, it seems, in the South.

I cringe for every child of every registered parent in the state of Virginia. Did the proponents of this horrible legislation consider them, I wonder, even for a moment?

What most registered parents of school children will choose, of course, in order to avoid the pain and humiliation and bullying and all the other negative consequences to their children, is to not place the ads, to not ask for a hearing, and to quietly remove their presence from their children's school lives.

Someone else will take them and pick them up. No more parent days or field trips or school lunches shared. No parent or counselor conferences. No school plays or basketball games to cheer on the budding actresses or future NBA stars. They will become the invisible parents, parents not allowed to do what even the most ignorant legislator surely knows is vital for optimizing the future of America.

They will no longer be involved, for thirteen years, in what is the major part of their children's lives.
Posted by shelly at 8:23 AM 9 comments: