Is Forty-Plus Years Not Long Enough? 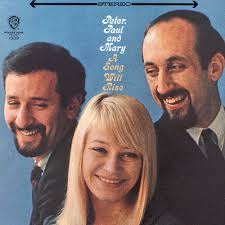 This one is for the old-timers. If you remember Peter, Paul, and Mary, you qualify, and this is for you. You should read the article first, but in brief, Peter Yarrow, in 1969, had a consensual but illegal relationship with a young lady below the age of consent. He served a three month jail sentence and has, for some, ever since been considered a sex offender. He has continued his music and combined his music career with involvement in political issues.

His alliance has been with those of the Democratic party. Those of the opposing party have not hesitated to dredge up Yarrow's past and use it against their political enemies, often with the results they desired.

It is happening again; Yarrow is featured in a fundraiser being held in Ithaca, New York, the end of this month for a Democratic candidate, and the Republican candidate is making as much hay as possible out of Yarrow's ancient record as a sex offender.

What then is the problem? Is rehabilitation not good enough for some? Is there some other standard of measure needed?

Those who keep throwing Mr. Yarrow's bad choice over 40 years ago in his face and using it to discredit their opponents are despicable hypocrites, and I would rather have Mr. Yarrow and an entire host of former felons who served their time, learned their lessons, and spent the rest of their lives as productive citizens as my political leaders than a bunch of mealy-mouthed hypocrites who are incapable of practicing what they preach.
Posted by shelly at 11:47 AM